Most male
chastity men will tell you that they are involved in the chastity lifestyle
simply because they want to experience something different in their lives. But
there are a small group of men that were forced into wearing a chastity device
because someone else decided they needed to have more control in their life.
These slaves usually have no idea what is going on in the mind of the person
that has forced them into their device, but they are willing to try it out
anyway because it is something new to them and they want to see where it might
take them. 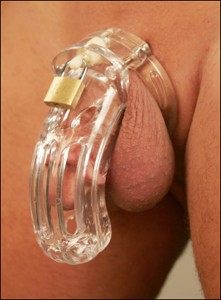 I have
spoken with a lot of male chastity men over the years and find that the slaves
are usually the ones that gain the most from being involved in this lifestyle.
They are the ones that will eventually go on to find the most unique chastity
device designs and be willing to try them on regardless of what others might
think about them. They are also the type of guys that will be more willing to
experiment with different aspects of the chastity lifestyle for no other reason
than their partner wants to see what would happen.

You don’t
have to be a slave to enjoying living like other male chastity men, though.
Basically, all you have to do is wear a chastity device for a few weeks and you
will find that there is no other lifestyle in existence that will give you the
same feelings of excitement. Some of the best days of my life have involved
wearing a chastity device out in public and that is something that you are
going to get to experience whether you are a slave or not. You can’t just hide
yourself away from the world around you because you have a cage over your cock
after all.